Today, I’m pleased to introduce you to one of the friends I wrote about in the earlier piece on Mentoring and Discipleship. Jenny Bernthal was my daughter’s 2nd grade teacher. I was also working at the school at the time. I remember some of us from school doing a Bible study together, I believe on the Psalms of Ascent. Years later, Jenny would lead my daughter and her friends in a Bible study in her home, and now my daughter has the gift of babysitting for Jenny’s children every so often. Her husband likewise has invested in student ministry at church and even came over to help move some furniture when my mom moved here a few years ago. On goes the circle of generational mentoring, discipleship, and friendship together.

I asked Jenny if she would be willing to share with us, and she has written how God used mentors in her life. Thank you, Jenny, for this challenge and encouragement, and welcome to the blog today!

END_OF_DOCUMENT_TOKEN_TO_BE_REPLACED

It’s that time of year again. My beloved Tennessee Volunteers are back in action, barely scraping out a win in overtime Thursday night over Appalachian State. And my favorite high school team has taken to the field again.

As I was at the football field the other day, the thought occurred to me. When these players prepare to play, they get ready. They spend hours at practice. They lift weights and get stronger. They review film so they will know their opponent, the other team they are playing. They eat right and do everything they can physically to be in shape.

And when they go into the game, they are dressed for action. They have on their uniform to show which team they are on. They have their pads and helmet to serve as protection from injury in what can be a pretty rough game. And they go into it as a team, together.

My thoughts ran to Ephesians 6:10-20. As Christians, are we aware and do we remember that we are in a spiritual battle? We face an opponent: “For we do not wrestle against flesh and blood, but against the rulers, against the authorities, against the cosmic powers over this present darkness, against the spiritual forces of evil in the heavenly places” (v. 13). When we go out into our day, do we consider that there is spiritual opposition for which we need to be prepared? And how do we prepare?

The Apostle Paul gives us help and tells us how:

Be strong in the Lord and in the strength of his might. Put on the full armor of God, that you may be able to stand against the schemes of the devil… Therefore take up the whole armor of God, that you may be able to withstand in the evil day, and having done all, to stand firm. Stand therefore, having fastened on the belt of truth, and having put on the breastplate of righteousness, and, as shoes for your feet, having put on the readiness given by the gospel of peace. In all circumstances take up the shield of faith, with which you can extinguish all the flaming darts of the evil one; and take the helmet of salvation, and the sword of the Spirit, which is the word of God, praying at all times in the Spirit, with all prayer and supplication. (v. 11-12, 14-18a; underlined to indicate actions we take and bolded to show the parts of the armor we need.)

The command that fascinates me is the one to “stand.” It’s repeated several times in the text. God equips us for the battle, and we are standing against, withstanding, standing firm.

It reminds me of Exodus 14 when the Israelites were standing on the edge of the Red Sea, and Pharaoh and the Egyptian army were closing in on them. The Israelites feared and cried out to the LORD. And Moses said, “Fear not, stand firm, and see the salvation of the Lord, which he will work for you today. For the Egyptians whom you see today, you shall never see again. The Lord will fight for you, and you have only to be silent” (Ex. 14:13-14).

What an encouragement that the battle is really the Lord’s! We need, though, to put on, take up, and use the armor He supplies (the Word of God, prayer, faith, truth, righteousness, the gospel, salvation). And we are to find our strength in Him and stand firm. He will fight for us. We can be still and, having done all, stand.

This spiritual battle is real. Our enemy prowls around like a roaring lion seeking someone to devour. But we can resist him, firm in our faith, knowing that our brothers and sisters in Christ around the world are going through the same kind of suffering (1 Peter 5:8-9). Similar to a football team who goes together into the game as a team, we love and support our Christian brothers and sisters and pray for one another that our faith would not fail.

And from football, there’s another analogy we can draw: like the team that is dressed in similar uniforms, we also have an identity. We belong to Christ. We have been bought with a price, the precious blood of Jesus, and we can go out in confidence, knowing whose we are and in whose name we go. We are dressed in the Lord’s armor, standing in His strength, going out under His banner.

If God did not spare His own Son to bring us to Himself, we should have no doubt about His love and faithfulness to us, that He is able to fight for and deliver us from the schemes of the evil one, to keep and protect us, and to bring us safely to Himself. May He be praised!

My son recently returned from a missions trip with some students from our church. The pastor and his wife who led the camp where they worked for the week are former students of my husband. We had the opportunity to be there for the last day of the missions trip, and it was great to reconnect with Mark and Ruthi and see their ministry, as well as hear about the week of opportunity and how God had used it in many lives.

One thing that struck me was how my husband had invested in his students who were now investing in our son who was also likewise beginning to invest in this couple’s young children, who promptly told me the nickname they had given my son! I saw a beautiful chain of relationship and discipleship, the worth of investing in the next generation and then seeing that continue. It is an investment of time and friendship, centered around the gospel that gives us this Christian fellowship. 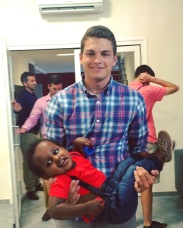 Likewise, my daughter’s second grade teacher was someone we enjoyed immensely right from the start. She left the school after a few years when her first child was born, but we kept in touch through church.

When my daughter reached high school age, this former teacher led a summer Bible study for her and a few other friends. This was a wonderful investment in their lives as they began a new stage of life. Now she lives just down the street from us, and my daughter babysits for her. Gospel relationships. One generation to the next.

Another of my husband’s former students began a mentoring ministry. A few years ago, my daughter and I were able to attend the conference for teen girls, where the moms (mentors) also received training. Last year, I also attended her mentoring conference for adults with my mom and a friend from church.

I love the vision for this ministry: “Legacy Living Ministries is committed to training women of all ages how to engage in an active love relationship with God, apply His Word and disciple like Jesus. They have seen and believe that through discipleship and mentoring relationships people begin to grow exponentially in their active love relationship with God and their understanding of how to live out His Word in their everyday life.”

When our friend comes to our home once or twice a year, she is so intentional with talking to both of my children and getting underneath the surface to hear what’s going on in their lives and encourage them in their faith. I love how God has gifted her and is using her.

How thankful I am for the teachers, pastors, friends, and family who have taken time to invest in our children. So many come to mind. It makes me ask myself how I am investing in others’ lives. There are so many ways to do that, including teaching children’s Sunday school at church or having a Bible study or praying for these students regularly.

We can always invest while being invested in, learning from the generation ahead of us who have sought the Lord and have insights we have yet to see, and helping teach the next generation who are maybe just beginning in their own walks of faith. We can be involved in peer relationships as well. It’s always enriching to leave lunch with a friend having had gospel conversations that spur us on in our faith and encourage us to love God more.

What ways have you seen this happen in your life?

Since I gave myself a very public 30-day blogging challenge, I suppose an update is in order. I only blogged 8 times in the first 12 days, and have since fallen off. Here’s what I have learned so far:

However, there have been many benefits:

So I have not met the 30-day blogging challenge. But I’ve learned a lot and hope to continue at a reasonable pace and learn and grow in these things. My desire hasn’t been to be a writer as much as a recorder of God’s work and things I learn from His Word, to praise Him. That’s what I want to communicate, particularly to my kids so these stones of remembrance are collected and not forgotten. Thanks to those who have offered encouragement on this little journey.

I wrote this many years ago, but pull it out every four years to reflect upon again:

May we be particularly prayerful during this political season. May we love those around us and pray for unity in our country. And may God’s good and perfect will be done.

(*Note: I haven’t watched much of either convention—just a few parts here and there, nothing today. This is in no way timed around any certain event or happening. Just a piece that came to mind tonight as I looked for something to post during my 30-day blogging challenge!)