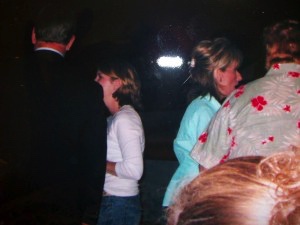 In April 2006, I went with five friends to an event in Indianapolis called Downpour. James McDonald, Joe Stowell, Beth Moore, and Crawford Loritts were the speakers, and Harvest Bible Chapel was putting it together. We were drawn to it mostly because of Beth Moore, someone whom we all love and whom God had used in our lives through her Bible studies. My friends and I were hoping to meet her.

Right before the event was to begin, four of us went out to the restrooms. While outside the main arena, my friends saw Beth Moore walk past on her way inside, and they wanted me to go over and say hi. (As it happens, Beth’s daughter is a dear friend of ours and was at that time living in our little town.) I anticipated that Beth was trying to get in for the conference to begin, so I was reluctant to say anything, but my friends were literally pushing me toward her to say hello. She was surrounded by what looked like body guards and her assistant, and I just could not interrupt her path into the arena — until, all of a sudden, she turned her head around as she was walking and looked right at me.

I said, “Oh, hi, I’m Melissa’s friend, ….” Well, she was as sweet as she could be, rushed over to hug me, said some warm things, and so on. Honestly, I thought I was at the point in my life where very few people would leave me starstruck, but you suddenly have this awareness that this is the godly woman who has meant so much to your spiritual life, and all I could say, over and over, was “You’re so tiny.”

Not “Thank you so much for your ministry” or “You have no idea what you’ve meant to me” — No, just “you’re so tiny.”

Then I became a little more gathered and said, “Well, I’m just here with some friends…,” not wanting to forget my friends, and I looked over at the three of them, and they were standing there starstruck as though they were deer stuck in the headlights, smiling, unable to move. One of the most hilarious scenes I could imagine, the four of us there, acting like total idiots!

When we returned to our seats, there were our two other friends who had not gone out with us to the restrooms. They were so disappointed they had not seen Beth, while the four of us were beside ourselves with happiness!

At some point during the conference, we got to move down to the front seats due to some connections that one of my friends had with the folks at Harvest. We were sitting right around the speakers. During a break, we visited with Joe Stowell and his sweet wife, as they are longtime friends.

One of my two friends who had not had the chance to meet Beth Moore, but who really wanted to meet her, probably more than any of us, is in this picture talking to Joe Stowell, while Beth Moore is literally at her back. 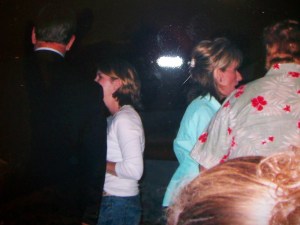 This went on for many minutes while the five of us sat there in our seats in hysterics, waiting for them to back into each other, to turn around and meet each other, to make some sort of connection. I grabbed my camera so we could document for her later how close she had been to meeting Beth Moore! In fact, I blew up the picture and framed it for her for her birthday that May.

Maybe you have to love Beth as much as we do for this to seem even humorous, but it was really funny. The Downpour conference was great, too, and we were blessed to be there.