My daughter keeps reminding me that I haven’t posted for a while on here. The problem isn’t that I’ve had nothing to say; it’s that I’ve had too much. The summer has perhaps been the strangest of my life. I’ll just use this post to share the first part of our summer, and save more details for later posts.

My husband and I began the summer with a trip to Europe. He led a student group through Italy and Switzerland, and I met him in Geneva at the end. We spent a week traveling through Switzerland and France, seeing some beautiful places, like this below (the view from our hotel pool overlooking the Mediterranean in Cassis, the South of France): 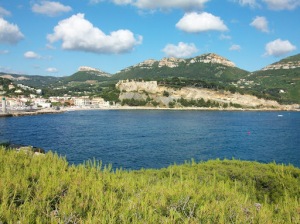 But let me back up… my first stop in Europe, after two flights and arriving finally all by myself to our hotel in Geneva, was here:

Yes, that’s the Emergency Room where we went for this:

You can’t really tell here, but he had fallen the previous day at St. Bernard’s pass while hiking in the Swiss Alps with students. Because he was the leader, he felt compelled to lead on, ignoring an inch long slice in his knee that left him unable to walk and in need of stitches.

By the following day, he was still unable to bend the knee, which was by now infected and swollen and would look much worse than this before it looked better!

He came away with 4 different medications for pain, swelling, and infection, and because he could not bend his knee, I became the designated driver for the trip! 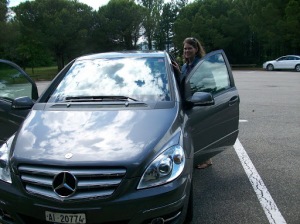 I found it somewhat nerve-wracking to drive, in my jetlagged state, through all the “round-abouts,” travel the interstates (especially when there was fog and rain), drive on so many narrow, winding roads in Southern France and in the Alps. I was never so thankful to pull back into the Geneva airport and park that car at the end of our trip!

We enjoyed the trip a great deal, despite my husband’s injury. Cassis was a beautiful port on the French Riviera. We took a boat trip on the Mediterranean which was beautiful:

Here is my hubby getting chocolate crepes before our boat trip: 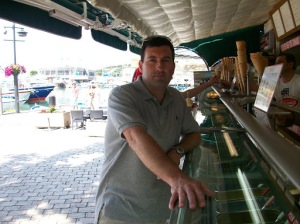 We went back later to the same place for gelato, which was delicious. Here is a picture taken after our dinner down by the water. Our hotel (the white building with lights) is in the background:

The hotel pool dropped off right into the Mediterranean and was a beautiful place to relax and read:

I show this last picture of France to give a feel for the kinds of roads I had to drive on. This one in the background was an easy one, but many were very steep and crowded with cars and people, and we were never sure where we were going! 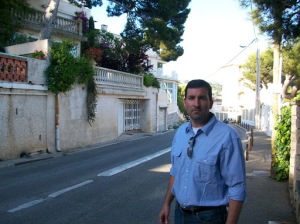 These truly were some beautiful places that we visited in the South of France.

We left Cassis and headed back to Switzerland, hoping to take in the full grandeur of the Alps. This was perhaps what I most looked forward to — seeing the setting of the books that my husband is writing and hearing him tell me about what places we were seeing were places in the book.

Unfortunately, this is what the Alps mostly looked like through the rain and mist we had the entire time we were there!

My husband kept telling me that there were really huge mountains behind what we were seeing, but I think my best view was actually from above during my flight into Geneva days before.

Here is a cute look at the little town we were in (Lauterbrunnen) and the windy roads of the Alps: 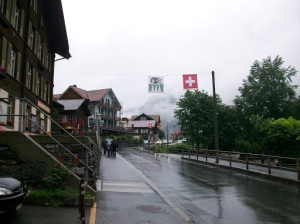 There were so many cute villages in the Alps.

When we actually drove into the area and passed the Thunersee, it was just breathtaking with the water and the mountains in the background! We had dinner overlooking the water one night, but my pictures did not capture the beauty of it.

For me, vacationing is often about the food! We ate in some amazing restaurants in each place, but one of my favorite parts of the trip were the “patisseries” in France, the bakeries in Switzerland: 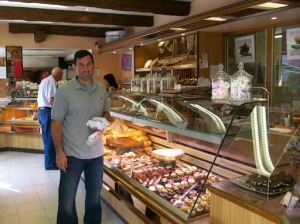 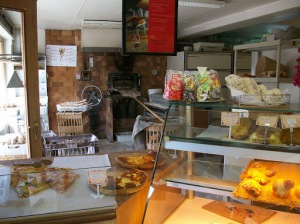 I looked forward to breakfast each day!

We finished our time in Europe by returning to Geneva and touring a few places, like John Calvin’s church:

It was spectacular indoors, and it’s amazing to think how long it’s been standing. The architecture was so beautiful. There was a concert taking place while we were there, so we didn’t tour it as thoroughly as I would have liked, but we did enjoy sitting and listening to the music for a bit:

I liked Geneva and seeing a big European city. This was down by the waterfront where we had dinner. It had to have been one of the windiest days on record! The people selling souvenirs said it was not typical at all… they were worried their things were going to be blown away! 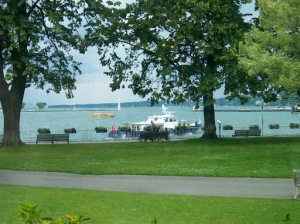 Here are some snapshots of the hustle bustle of Geneva: 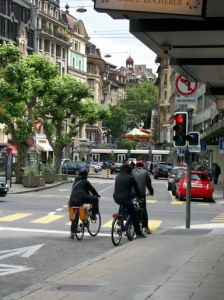 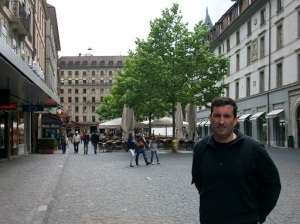 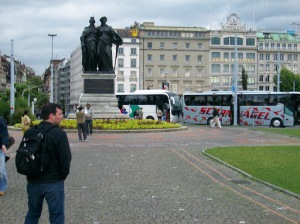 This has become a long post with all the pictures, so I’ll pick up in the next post on more of our summer travels, but let me end with this.

God is absolutely faithful! I’ll share the reasons why in another post, but I was so nervous to travel so far from home, cross the ocean, go to other countries. Despite my fears, which I had to confess to the Lord again and again, He faithfully met me every step of the way, and I learned so much. I will share some of those things later, but I can’t end the post without blessing His Name and praising Him for His faithfulness and protection and peace. He is an awesome God, and I stand in awe of Him!

5 thoughts on “A Summer to Remember”